A smattering of doings from years past!

Headliner To Be Announced

Upon the untimely death of Lady Bronwyn’s father, Lord William Hawke, Ivar relinquished his position in Viking society & accompanied Lady Bronwyn back to Scotland to serve as Noble rulers of Wyvernton Shire.

A short time ago, Queen Julia retired without an heir and for a time, left the land in quite a quandary! After much scholarly research, it has been discovered that a former royal privateer turned pirate is the heir to the crown!  So, the captain of the Bountiful Harvest and his all female crew were summoned  to England for a coronation. Now, the newly crowned King William James of the house of Roberts, his son, Prince Alic and his beloved sister, Princess Alexandra Mary Elizabeth are attending celebrations in HRM's honor in Wyvernton Shire.    While becoming acquainted with his royal duties, it is rumored that there be pirates about that seek to bring the king back to the high seas and a life of plundering!

Come find out what kind of mayhem ensues!!

Medieval Mayhem Renaissance Faire Brought To You By:

The History of Wyvernton Shire!

Wyvernton Shire (land of the dragon’s keep) is a magical land located in the Scottish Highlands. A vast kingdom, it was given to the Lord William Hawke for his loyal service to the English Crown during a time of great upheaval. A generation later, his only heir, a daughter, Bronwyn Hawke, now holds title over the kingdom. The Lady Bronwyn, as a child, was sent to the English Court to be educated and give service to the then, Princess Julia. Upon returning to her home land for holiday, the Lady Bronwyn was taken by the fierce war lord, Ivar Nokson, in a Viking attack on Wyvernton Shire. Ivar stole Bronwyn, took her to his home lands & wed her.  Twaz there that she bore him two strapping sons. 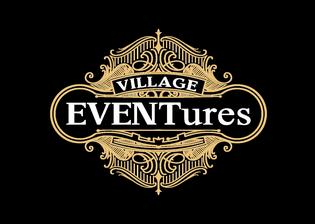 We here at Medieval Mayhem understand and appreciate the love we have for our pets. We have many working animals here in Wyvernton Shire.  Due to insurance restrictions, city policy, and with concern for the safety of both people and animals, we ask that you leave all non-service animals at home. Service animals must be trained to do work or perform tasks for a person with a disability and its work must be directly related to the handler's disability. Emotional support animals are not considered service animals by the ADA & are not permitted to attend the event.    Thank You. 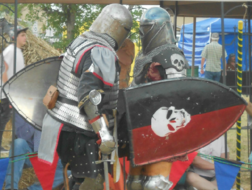 Check out our Entertainers and Vendors 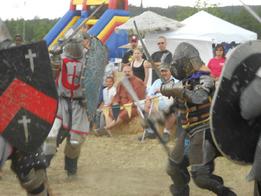 One show each day on Friday, Saturday & Sunday

Get your tickets for Saturday night's concert -

(Just North of the Deuce of Clubs in downtown Show Low!)

Where a thousand years of history comes to life...​